Here we are Orcs

Hi, I’m Praveen Velliengiri, this is a write-up of my Google Summer of Code 2019 with LLVM Compiler Infrastructure. LLVM is a modern compiler toolchain, checkout here. Find me @

LLVM is not a million lines of code, but it is a group of people who make it possible :) This in general applies to all Open Source Orgs. Over time I find the culture in LLVM is extremely friendly (mainly for newcomers). LLVM developers are very supportive and kind enough to explain whatever complex LLVM concepts. I used to ask very stupid questions like (hey, how to traverse a Basic Block) and still does :) Basically, they are just a bunch of cool folks! I highly recommend anyone to be part of this awesome community. Seriously, take my words for it.

This wouldn’t have happened without my 2 mentors - Lang Hames & David Blaikie. Over this course of time, they gave me incredible support and helped me to understand LLVM, development process, how ORC works, etc. They both work on LLVM as their day job, Cool right? They replied to all of my emails, chats & questions :) I learn a ton of great stuff from them. Honestly, I’m very lucky to work with them. They ultimately became my role model.

In LLVM, we already have ELF (Executable & Linking Format) and DWARF(Debugging With Attributed Record Formats) so include bad guys also - ORC’s, just kidding :) ORC(On Request Compilation) is a fairly new LLVM Concurrent JIT Infrastructure, it is not very tightly coupled with LLVM though. You can write your own compilers for your own program representations (like AST, IR, or anything you call) and you can freely use components of ORC. To understand ORC you have to think from the Linker’s Perspective, that is how I can link the symbols, how I can resolve and relocate symbols?

ORC triggers the compilation of symbols (data, function) when it is looked up via ExecutionSession::lookup. It also manages concurrent compilation for you: multiple compilers can run at once, and multiple concurrent lookups can be made for symbols.

It also supports lazy compilation - that is you compile when you need it. It is an important feature to have in Just in time Compilation Engine. It helps the Apps to start faster without paying ahead of time compilation cost, but as you imagine you can’t run your program until it is converted into binary, there is a cost to compilation during the execution of App.

At first, I knew nothing about ORC. I have to understand them to work in them. This was tough because I didn’t have any experience with JIT or Linkers before. There is no detailed doc at that time, so I choose to read the entire project & add llvm::errs to understand what is really going under the hood. It was tricky at first, but eventually, I understand the Orc’s spell. It was rewarding, really!!

The primary aim is to develop a proof-of-concept of speculative compilation to understand how it works, whether we can improve & solidify in future LLVM release for all to use. Now that we know about ORC we can jump into my project, Are you ready?

This is the project I spend my summer on! The main aim of this project is to hide compilation time which is mingled with the App execution time. Okay, but how to do that? Orc supports concurrent compilation - the key idea here is to use this feature to lookup symbols early before they even get executed. By using the additional core’s you can reduce your total execution time :) But how do we choose what to compile early? That’s the key ingredient of this entire work, speculating intelligently, that is knowing which function will likely be called next.

ORC supports orthogonal feature set, so you can mix and match to build your custom JIT stack and play around it. But Speculative Compilation is non-orthogonal, it is bounded with Lazy compilation. ORC has layer concept which processes your program representation and emits the result to the layer below - examples of a layer in the trunk are LLVM IR transformation layer, Compiler layer, Object Layer

For our speculation to work we have to communicate between those layers: We introduce an ImplSymbolMap class - this helps us to track the Implementation symbol and Impl JITDylib of facade symbols. This is the duplicate information we keep around and helps us to move forward with our proof-of-concept goal. We have decided to remove this information by sharing the single copy of this information between lazy and lazy+speculative compilation scheme.

Speculator: This is an important class, it serves two responsibilities to us: Register which symbols are likely for the given symbol. Launch speculative compilation for likely symbols, when entered from the JIT’d code.

IRSpeculationLayer: It follows a layer concept, it instruments the LLVM IR program representation with globals, and runtime calls into the JIT compiler which helps to jump back into ORC during application execution to launching compiles and return.

SpeculateQuery: They are normally function objects, which query the given unit of IR (function) and return the which are all the likely next executable symbols.

But we observe that those blocks often occur inside a loop or that may be a block with many predecessors, this means that are still essentially not covering blocks with calls that are nearer to the Entry Basic Block.

Since this is a new feature, we like to introduce it as a big changeset by following WIP commit style.

All the revisions mentioned above got accepted, Merged Revisions:

How IR is instrumented?

There are two ways to make speculative compilation work:

For a proof-of-concept, as things currently stand we perform speculation through LLVM IR Instrumentation.

Here the main function contains 4 basic blocks, and based on the branch instruction: %4 = icmp ne i32 %3, 0. Control jumps either to Ontrueblock or Onfalseblock and calls either foo or bar respectively.

In a nutshell, for each function which calls other functions, the IRSpeculationLayer::emit method create a guard.value which is global i8 with internal linkage and initialize with 0. Upon the execution of @main, we check whether we executed the function before or not, if the function is not executed yet, the control jumps to __orc.speculate.block and call __orc_speculate_for, passing the function’s own compiled address, this jumps back into the Orc and launch speculative compiles of very likely functions of function @main.

The compare instruction in __orc_speculate.decision.block : br i1 %compare.to.speculate, label %__orc_speculate.block, label %program.entry guard us from re-entering into JIT on the second invocation of function.

What is the Speed Up?

In the end, many people wanted to know: did we get any speedup or improvements in general? Especially in compilers, people love this word - performance. If you are one of them, then this is the section for you. We have seen consistent speedup in all applications with our proof-of-concept “Speculation” model. 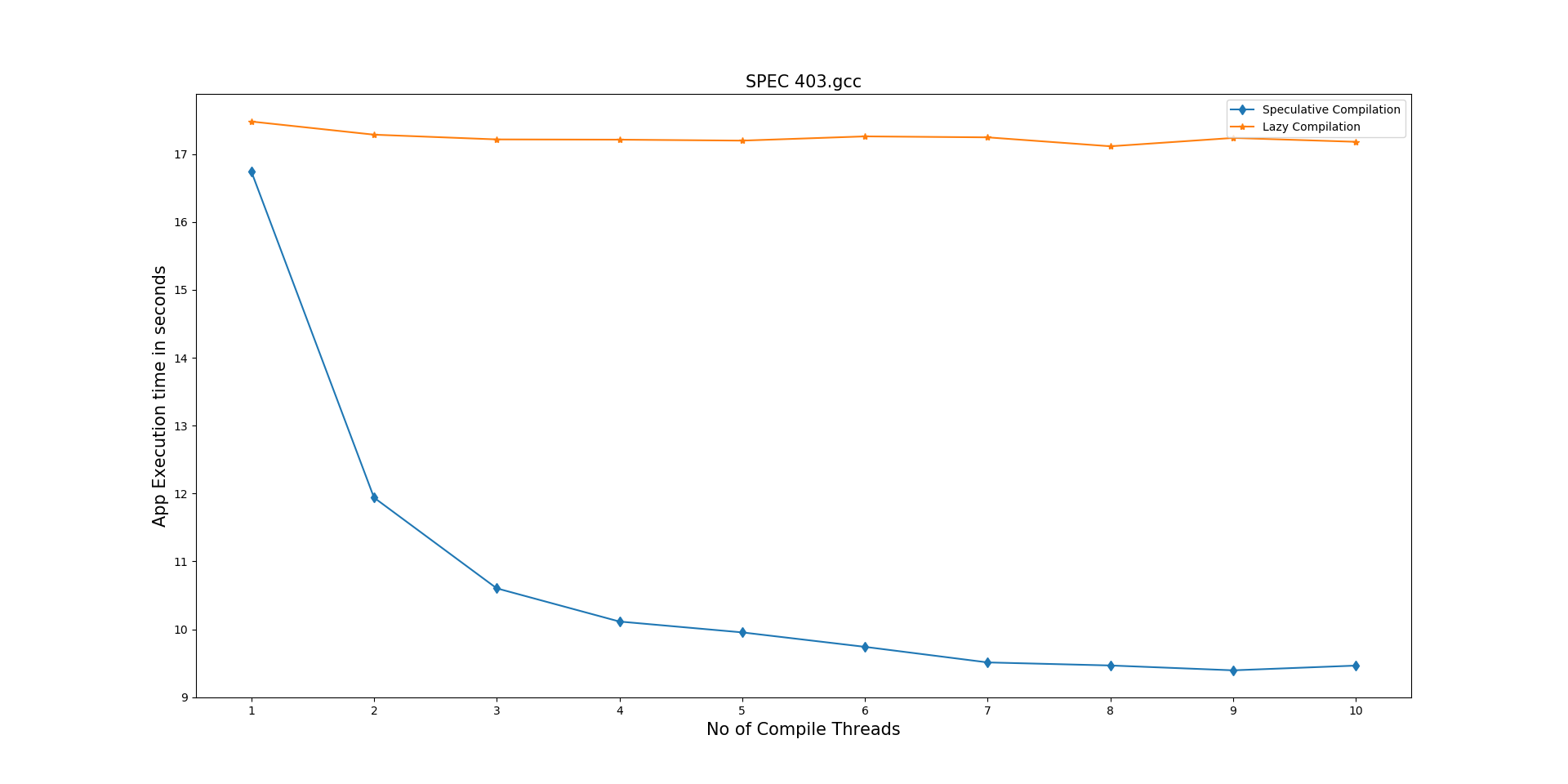 These results are for the SPEC 403.gcc benchmark program, we see the speedup of > 40% over Lazy compilation counterpart, with 10 dedicated compile threads we reduce the total execution time of application (wall clock time) from 17.4 seconds to 9.6 seconds. 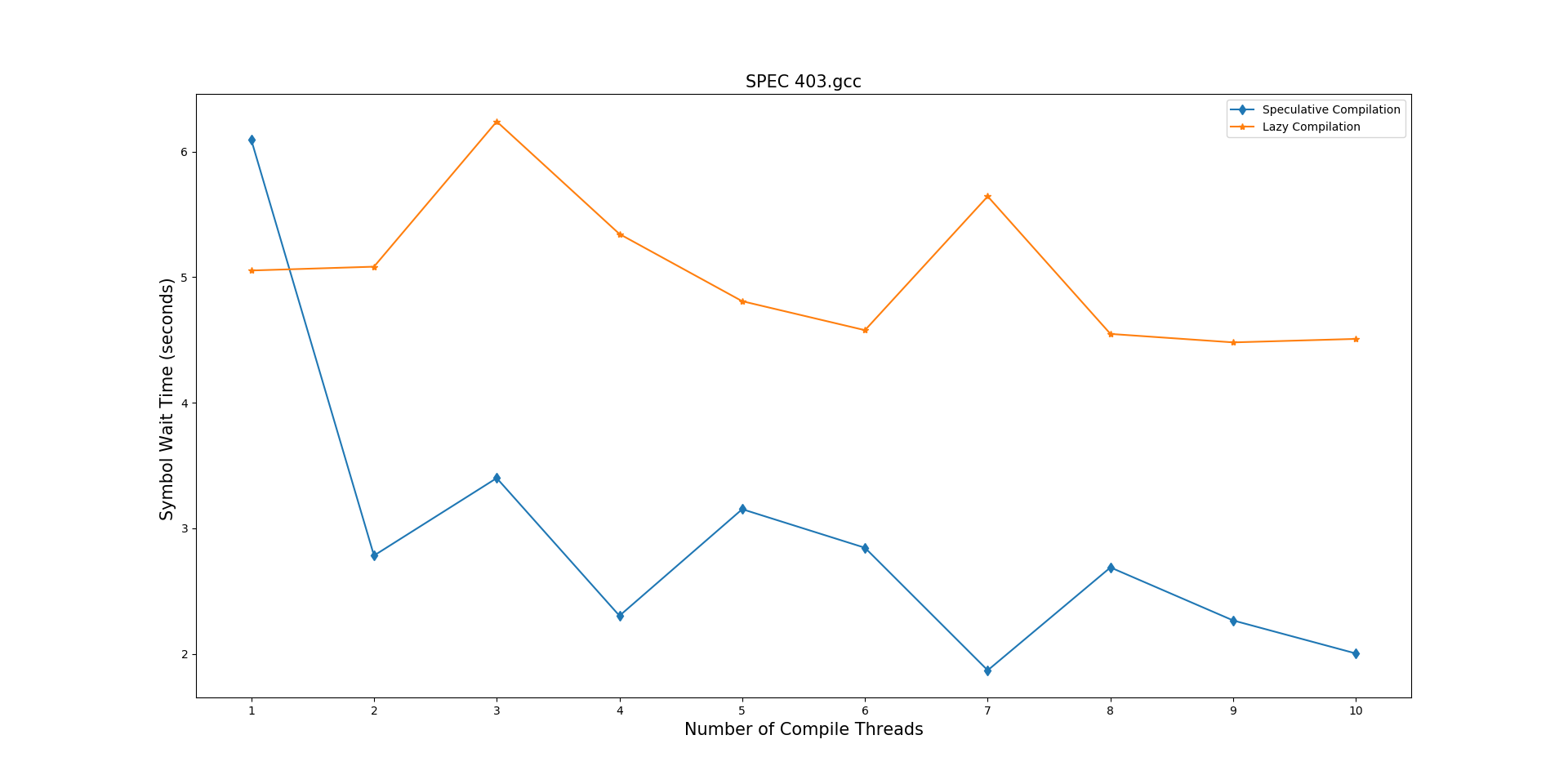 The Y-axis represents the total time spent in symbol lookup, (amount of time execution thread wait to get runnable code for functions). As we see from the graph, by having at least two dedicated compile threads we can reduce the total wait time over 35%.

Our proof-of-concept technique is also performing well in lightweight apps:

We conclude that by solidifying our infrastructure we can still squeeze maximum performance from the machine.

You can check out the LLVM and you can use the work! The committed code is self-contained, we have also added an example custom JIT Stack with Speculation scheme we hope it will serve as an example for people to update and configure their JIT stacks. You can find the example in main LLVM trunk - SpeculativeJIT

Thanks for checking this out, if you any queries regarding GSoC always free to get in touch with me Twitter handle - @preejackie